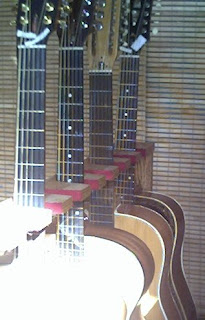 We've covered the room and the microphones, so let's listen to some guitars.

First up is a Taylor 355, with Light Elixir strings, tuned to concert pitch. It is very bright. This is a one minute sample from "Spanish Escapee", from my first CD. (1.2 megs)

This is the LKSM-12, with Medium Elixir strings, tuned down a minor third. This is the first Bach prelude from the Well Tempered Clavier (4 megs).

The rest of the samples are encoded using Ogg. I haven't used Windows in years, and I don't know what the state of support is. Drop me a note in the comments if this is a big problem with Windows users and I will redo them as MP3s. I try to support open source, patent free, software when possible.

Here is a Spanish 12-string with fan bracing, slotted-head tuners, and an unknown brand of Light size strings, tuned 1 step down. It has a very funky sound and it's hard to play. Appropriately, here is an abbreviated Funky Butt (3 megs) Light strings, old, don't remember the brand.

One last thing; the Spanish braced 12-string that I picked up at a lawn sale for twenty five bucks is the loudest of the bunch! Here's the unedited file when I recorded all 4 guitars, one after another: