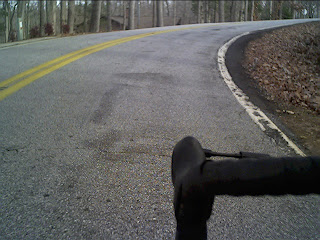 Every Thursday night throughout most of the year a group of cyclists gathers at Mike's Sunshine Shop for the ride up Paris Mountain. It isn't really a mountain. The real mountains are North and West of here, about forty miles away. Although all of Greenville is about 1,000 feet above sea level it used to be part of the Blue Ridge mountains which are much higher; erosion wore most of the area down some, but Paris Mountain seems to be made of sterner stuff and now stands about 1,000 feet higher than anything around it.

So we meet, sometimes just the people who work at the shop, but on some long and hot summer days there are 30 or more cyclists in the pack.
From the start, we meander around the smaller hills and valleys surrounding Greenville for about 20 miles before we reach the mountain. We start the big climb on Altamont road, which is the same road that the pros used in September for the United States Professional road race. This is what the climb looks like using Google Pedometer.

A lot of us click on stop-watches at the base because, even if we can't be first to the top, we do want to see some personal improvement. On Sundays I often go out to the mountain alone and train up Altamont road, as well as some of the other climbs on the other side of the mountain, because when the next Thursday night ride comes, I want to be a little faster, or finish in front of people who passed me last week.

I take some of this same attitude into guitar playing. The new tremolo fingering, pimi, shows some improvement but the speed is not nearly fast enough to give the sense of a singing melody. I checked out some classical guitarists playing tremolos. Here is a good example of Pepe Romero playing a beautiful rendition of Recuerdos Del Alhambra. I think he is playing about 150 or more complete pima's every minute. Mine is a pathetic 80 or 90. I found that one thing slowing me down on the Gibson B45-12 was a high number 6 string (the lower note of the third course), the top of which was considerably higher than its octave partner. I carefully filed a notch in the bridge so the top of this string is even with the octave in that course. This helped smooth out a tremolo on that string, but my speed is still pathetically slow. I'm still not sure that pimi is the correct method to invest more practice time in, but I've tried pima several times in the past with not very good results. The pima on just the first course is a lot faster than pimi, but I have no accuracy on the inside courses. I'll just have to remember that when I started working on BWV999 I played it about quarter=60 and now I'm comfortable playing it at quarter=95.

Usually there are a lot of things more important than speed in guitar playing, but a tremolo requires some speed to create the illusion of a singing melody. I know I can't go up Paris Mountain as nearly as fast as a professional racer like Levi Leipheimer, but no one judges my form, just my speed; playing a tremolo requires good speed as well as good form.