While I'm finding out interesting things about tremolo on the 12 string, and it is taking a longer time than I expected, let's talk about strings for the twelve string acoustic guitar. The material that your strings are made from, and how much tension they are under, probably has affects the sound of your guitar more than anything else. But the wrong choice can permanently damage a 12-string guitar.

Strings for the twelve string guitar are commonly labeled in four weights: heavy, medium, light, and extra light. There are no standards for the labeling, so medium and light can be the same tension, and light and extra light could also be the same tension. You have to look at the composition and the gauges of the string set to be positive about what you are getting. There's more about this below.

With twice the number of strings we have to be careful that the tension doesn't distort or damage the guitar. A 12-string guitar isn't that much more durable than a six string. Compare these bracing examples from James Burkett's guitar page to the bracing on my 1963 Gibson shown here: 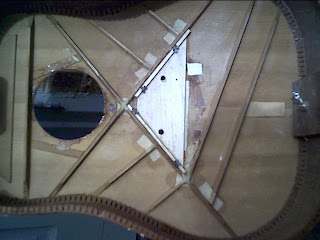 The same thickness for the top piece, standard braces and head blocks; you can see there isn't a lot of difference. However the pull of the strings will often be over 200 pounds. So that's the first thing: make sure your strings don't bend your guitar in half!

How are you going to tune your guitar? You may have already decided this from experience, but if you're starting out, here are some points to consider:
Other than these points, you will want to consider the amount of resistance you like to feel in the strings. Some, me included, like them sloppy. I find it easier to play. How often do you want to change strings? If you aren't recording or playing concerts, you may be satisfied to keep strings on for months. Coated strings last longer, but they sound different. You have to decide the trade-offs.

Finally, an important point for sound quality is the type of string. Phosphor bronze strings sound different than 80/20 or Silk and Steel. Coating on a string modifies its essential sound. These are things you have to decide and you will probably spend a lot of time messing around with the various combinations, but for now we are interested in choosing strings that will work and won't damage your guitar.

Here is a list of string tensions for various kinds of strings. I calculated them using this string tension calculator. I used a scale length of 25.5 inches. Weights are in pounds. Where it says 'Tuned to X', then X is the note that the 1st string is tuned to and the other strings are tuned normally relative to it. For example:
E A D G B D is normal tuning for most guitars. So the 1st pair is tuned to Concert E. If it says "Tuned to C#" it means the pairs are tuned this way, starting at the first pair: C# G# E B F# C#. A=440. If you use open tunings, you will have to make your own calculations; however this will give you a good guide to weights versus pitch and how much you can stress your guitar.

The highest tension combination here is the Elixir Heavy tuned to C#. This is how Taylor ships the LKSM-12. The rest of the standard Taylor line of 12-strings are shipped with Elixir Lights tuned to concert. You can probably take those as points that you don't want to exceed. I find it odd that the LKSM-12 which actually has lighter bracing than a standard Taylor 12-string is shipped with about 50 more pounds of tension.

I like the feel of between 200 and 250 pounds of tension - it's a nice resistance. However there are a couple of options for players who like less resistance and easier left hand fingering: Silk and Steel, made by several makers, or Thomastic 12 string lights. Either of these will give you tensions under 200 pounds. I've used Martin Silk and Steel, and playing with them for the first day or two was almost the most fun I've had with a 12-string! They were incredibly easy to play and had the nicest sound. Unfortunately they died very quickly. Oh well, maybe you will have better luck.

As long as you don't chose string and tuning combinations that can damage a 12-string guitar, choosing the right strings for your guitar is a fun project and will probably last your entire career as a guitarist.