I'm slow and have no sense of time

I've been working on a piece called 'Track Stand' since June of 2007. It's an arrangement from Vivaldi's opus 3; I first heard it at a midi site years ago via a Sebastien Bach arrangement (Bach's Concerto No. 2 in A Minor BWV 593: 2nd Mvt- Adagio). The piece consists of a very familiar Spanish (perhaps originally Moorish) motif done in two alternating voices. It's very slow, and I find it difficult to make sure the voices both flow and are distinct from each other. I call it 'Track Stand' because it reminds me of sprint cyclists balancing their bikes at a standstill so they can get in a good draft position for the explosive ending sprint. Yesterday I discovered something disturbing.

I loaded a take of the piece in Audacity and generated a click track at the approximate tempo. Holy cow, what a mess! My tempo stayed with the click track for maybe a measure of two before slip-sliding here and there, then a bar of correct tempo, then back to mush.

Bad tempo is a problem for me. I haven't played in a band or with other musicians for many years. I need a metronome to keep me honest.

Here are the sections I moved up: 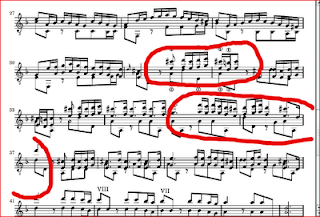 BTW, good luck to you folks up North. It's cold down here in the Carolina's, but nothing like what you guys have been going through lately. I spent a lot of Winters up there and know how brutal the cumulative effects of this weather can be.

I tend to have the same problem with timing. Although I have a regular metronome, I find Gtick much more convenient.

Everything you have been hearing about the cold doesn't do it justice. It is BLOODY COLD up here. Brrrrr!

Working a 12-string into an ensemble in a meaningful, crafty way can be tricky, so it isn't hard to understand why you haven't been playing with others.

When you move the selected passages up, you're in effect omitting the lower octave by moving from an octave to a unison course, yes?

I find that daily meditative clapping with a metronome at various tempi, as a means of shoring up one's internal rhythm, can be very effective.

Please post more often. Our instrument is underrepresented and your voice is needed.

DadGadJohn,
I'm thinking about getting a mechanical, portable, metronome. Sometimes it's a pain to go to the computer to change tempo.

Peter,
I moved the passages up and inverted them. It puts a lot of notes on the 1st and 3rd courses, which is a sound I've always liked in the 12. You got me thinking about why, which is why I didn't reply right away.

PS. I like the meditative idea a lot.
Art