3am, the mother of invention 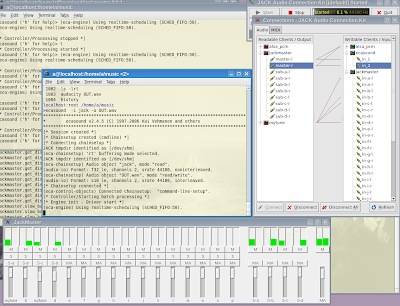 I woke up at 3 am thinking about how Track-Stand should be recorded. It is based on a Bach re-working of a Vivaldi piece. It is very grand and static, like a giant cathedral, and difficult to detail the two lines that alternate in a dramatic and stately manner. Other things were spinning around also, like how to do a video for this piece. But first things first.

I always heard this piece as a duet of screaming electric guitars. It is so slow that it needs a lot more sustain than an acoustic 12-string guitar can provide. So I got the old Gibson B45 out and mounted the Sunrise pickup and recorded a sample. Using ecasound to record, the pickup and the mic are panned hard right and left, and they should be blended, so I looked around the Internets in vain for a Jack mixer. No joy! Seems they were all alpha or had been pulled from the web. What to do?

After a little thought, it seems that the Alsa Mixer would function just fine, because it is visible to Jack. I actually use the Envy24Control as the mixer for the Stereophile 2496 card and you can see the ins and outs of the control in the Jack Connects in the picture above. They are labeled 'alsa_pcm'. I haven't tried it yet but this little recipe should do the trick:
Update: Well this didn't work at all, but teh google gets a newer (and better) solution: JackMaster. This project was posted about a year ago by m0hre, and never updated from a developer set of code, that is, no rpm's or even a configure file was provided. There was no documentation other than a screen shot, so I passed this one by the first time through looking for a mix-down solution. Too bad, because it turns out to be a sweet app.

Installing JackMaster in Linux may be frustrating for a musician with little computer dev background. I've tried to forget my dev skills - they are rapidly growing obsolete. You should at least have installed a distro with developer tools. Even unpacking the downloaded archive took some doing because I wasn't familiar with either cpio or z7 - the first is very old and the second is very new. I had most of the build tools except for libizer, which I got by yumming libtools. After installing libtools and making a directory that autogen.sh asked for, Fedora 7 I was able to quickly go through the "./configure; make" sequence with just warnings and then fire up the resulting executable that was built in the src folder. As you can see in the screen shot up top, it is a real mixer that connects to Jack. Mute buttons are labeled 'M'. Solo buttons are labeled 'S'. You'll get an idea of the rest of it by going through the 'recipe' below. I hope it helps any other Linux based guitarists. My recordings are 2 tracks at most, but the recipe could be adapted for more. JackMaster handles more tracks than a guitarist could afford to use.

m0hre, wherever you are, please work on this app - it deserves more use.

mixdown recipe(Updated, as well as the image at the top):

play the tune to be mixed down in ecasound:

Use qjackctl to "Connect" from mytune to alsa_pcm playback 1/2
Run JackMaster mixer:
in qjackctl "Connect" dialog, make these connections:
this gives you 4 input sliders:

Assign the first four inputs in JackMaster by toggling on the 3rd row buttons
first is S-a, second is S-b, third is S-c, fourth is S-d
this sends each of these outputs to the four masters grouped on the right

When it sounds ok, setup another ecasound instance to write the new wav file:
In a bit I'll post a sound sample, but for now, here's a bit of the Track Stand score: 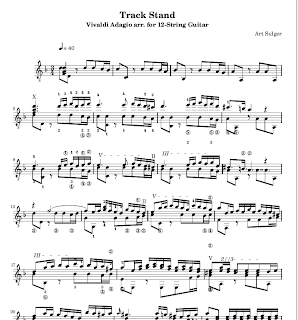