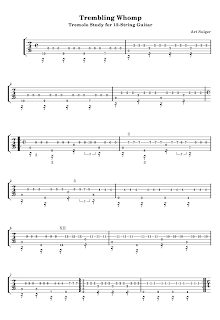 I previously posted about mastering the 12-string Tremolo study, but after all the writing I've done about it while working on it, now that it is finished I'd like to give some more details and post the score.

Although the idea for the piece came to me while pursuing the wily 91 hertz resonance that fell right on the open A of the LKSM-12, my goal while writing was two-fold: first, to practice tremolo without having to play Recuerdos del Alhambra (watch about 50 performances on YouTube and you will probably lose your desire to learn this piece), and secondly, to find out if a tremolo had any place in the 12-string repertoire.


The tab is here, and the score is here.
The piece is on SoundClick...here.