The Tremolo study is coming along. At first I wanted just to experiment with the technique, then I started wondering if a tremolo even sounds good on a 12-string. I found early on that the melody is in the tremolo part, so writing a piece is like composing a piano piece that has a slow melody with a simple broken chord left hand. After a bit of work I came up with this (click on the image to see it larger): 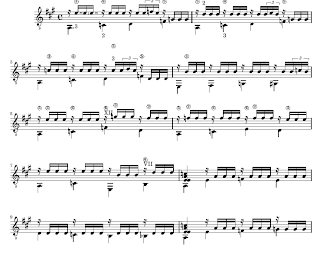 It didn't knock me out, but it has some interesting things in it. The tremolo is played on the octave course strings, not the unison strings. Even though the tremolo melody has some big jumps in it, when played evenly the melody flows. The bass accompaniment is interesting enough and I like how it takes over in the last measure. Still, it didn't blow me away and make me feel like playing the piece over and over. That's when I happened on this second section: 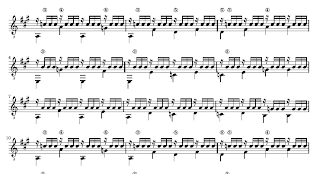 I guess at the center of every lively tree some sap must flow - so here is the sappy part of the piece. I had to write this out to figure out how to count it. I'm still not sure of the meter. It sounds musical though.

So I had a technically interesting part, and a somewhat sappy, but nice sounding part. Nothing here made me want to play the piece a lot. That's when I happened on some tremolo runs that rocked just a little bit:

This run, and a couple of other runs like it (one even ending in a G chord), seem like good ways to tie the sections together. I'm currently playing it as A B A, with B being the sappy section, but I found an alternate ending to B that I would also like to use, so I may be doing something like A B A B...then ?

At least now I'm finding it interesting to play.