Should we mix an acoustic guitar to pink noise? Lot's of music sites suggest that you balance your mix to match pink noise. So lets look at some pieces by Leo Kottke, Chris Proctor, Kaki King, and others to see how 'pink' they are. Let's look at a couple of modern dance pieces also. 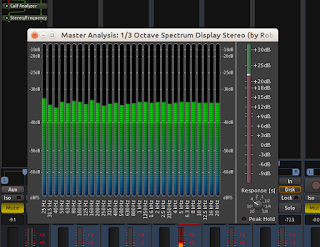 Arcade Fire, 10 out of 10 on the loudness meter. Here's the octave analysis: 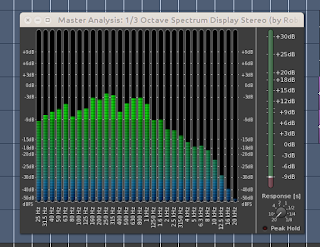 This is a portion near the end of the tune. It's the closest section I could find on the track Modern Man to a true pink noise spectrum.

Here's Back to Black, Amy Winehouse:

But how about the guitarists? I was surprised to see some early Kottke blasting across the spectrum. Here's a bit of the slide guitar piece "Coolidge Rising" on Leo Kottke's Armodilla Album 6 and 12 string shown here,...very bright.


Later Kottke from "Try and Stop Me" looks much more like a nautural guitar sound.

Leo Kottke, Try and Stop Me


Chris Proctor gets a full, fat sound out of his guitars. Here's the spectrum of a bit of Henry's Shuffle. Even with the full sound, the spectrum curve seems like a range of frequencies that look normal, like I would get just recording my 12-strings at home. 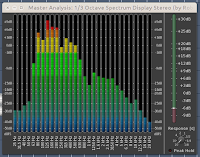 A surprisingly normal acoustic spectrum from Preston Reed's most jangly piece on Metal:


Kaki King has a nice full fat sound. Definitely added some overtones to this mix: