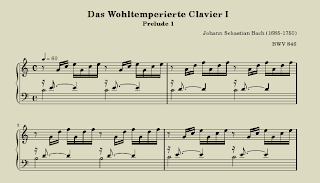 Here are the last few bars, just before the flourish at the end:

A professional musician told me that one of the defining characteristics of this piece is that during the course of it, the piece "transposes itself" down an octave. This is clear when you compare the first measure with the 32nd measure.

In contrast, here is how most guitar transcriptions, including my own, do it:

Measure 1 and measure 32 are the same octave. There is no transposition, and the guitar version is missing a significant feature of the piece.

A better idea is to start an octave higher. However, this is almost impossible on the guitar. The first problem comes in the 5th measure - you would have to reach to the 17th fret! A nice solution, that in the end has some serendipitous results, is found by transposing the piece down a fifth, and tuning a dropped D. 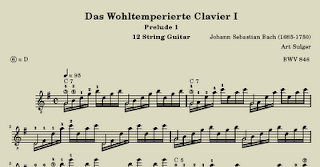 Update August 2, 2010
Baroque Gig Book For Guitar is available, so I've removed the link to my new score.