I bought my first 12-string, a Gibson B45-12, in a pawnshop on 3rd Street in New York City. Why did I buy a 12-string? I don't recall even hearing a 12-string except for maybe a Hudie Ledbetter song. I don’t think I knew anything about 12-strings, but that it was a big, shiny object, and made my teenage eyes grow huge with desire. The amount of hardware and shiny strings fascinated me.

I had seen some odd, fascinating musical instruments in the Village - things that looked like guitars but with weirdly extra strings. Here I was not far from the Village, over on Third Street, looking to buy a guitar and I found myself compelled to buy this 12-string in this pawnshop. It stayed with me for the next 40 years, and is with me today, through many interesting times, pictured on the right.

Within about 10 years the top became wavy, and the bridge started lifting. Part of this was the light construction of this guitar, but most of it was my fault: Living from apartment to apartment, sometimes rooming with others, hitchhiking from Boston to Cape Cod to New York City in super hot days and icy-cold ones, the guitar stayed with me, strings rarely changed, often not in tune. There were also the peaks and valleys of drug use, drugs to make you play like mad, drugs to make you want to 'adjust' everything,
drugs to make you stagger across the room. Today I have a little electronic tuner and I'm a fuss-budget about string diameters and tension, and I hope I wouldn't touch a guitar if I got drunk; back then we depended on a harmonica or a piano or just a 'best guess'. And even though everyone had a guitar, and we all discussed the pros and cons of Silk and Steel versus Light versus Medium versus Slinky strings, I never heard anyone discuss tension or pitch. Looking back, this seems odd to me. Maybe it was something that flew by me as 'not interesting'. I don’t think I was in love with the Gibson in those years, but I played it to the exclusion of any of my 6-strings, and enjoyed that it was different from what others played. It didn't sound like the 12-string that Bob Gibson used or like the ones I heard the Rooftop Singers using on their top 40 hit "Walk Right In". That was the sound I would have liked it to make, but I wasn’t about to buy another one. It sounded dull. The B course sounded like it was made of hardware store wire used to hang pictures. There was no sparkle. I was so not in love with it that I put a pickup on to play Rock and Roll. Then I decided it didn't look right. I stripped the finish off it and added abalone and gold designs - meth-inspirations. The top had started to buckle, so I added a tail-piece but keep the adjustable saddle. I try adding a nut saddle to brighten up the sound. Eventually I abandon the Gibson and play Classical guitars for the remainder of the 20th Century.

The B45-12 has an interesting history. Gibson continually remodeled the guitar since its introduction in 1961. In 1962 or 63 Gibson changed the body style from round to square shoulders. My guitar, the 1963 model, seems to have bracing no heavier than a Gibson 6-string. I snapped this inside picture of the bracing while replacing the bridge plate. 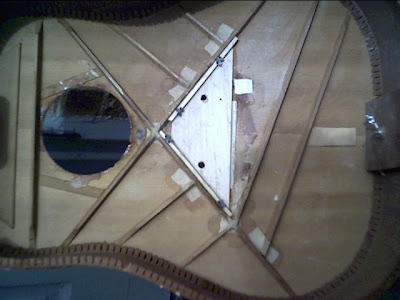 I’ve since read that Gibson advised players to keep the guitar tuned down at least a whole step. I don’t recall the pawn shop owner explaining that to me (it sometimes pays to buy your guitars from a music store).

Characteristic of all the B45-12’s, as far as I know, is the adjustable bridge. If you remove the saddle you can see that all 12 strings cross over an ebony bridge, slightly notched. The bridge is held at each end by a long adjusting screw that fits into light metal plugs that are inserted right into the spruce top. Each threaded plug is about ½ inch in diameter. This is the main contact that the strings have with the top. Gibson switched between several methods of anchoring the strings over the years. Initial models used a pin bridge, then a few years later a pin-less bridge, where the strings feed through the saddle and don’t go through the top (this sounds like a good idea; there are no holes drilled in the top and through the bridge plate). Still later they changed to the tail-piece, but unfortunately kept the same pin type top bracing; this apparently led to a degradation in sound and could lead to different types of top deformities down the road. The 70’s saw a return to pin bridges, some changes in scale length, and finally, a change to a 12-fret neck. If Gibson could combine the magic of the 1963-1964 models with a 12-fret to the body neck, that would be one fine guitar. Add a cutaway and they would sell a million of them! Most people think the Gibsons of the 70’s were kind of over-built and clunky sounding.

First in a series about this fascinating guitar. Later: "If you could hear what others hear"